I just finished this project and I am SO excited about it… not least because it’s now all stuffed full of treats… But before I get to the main event, here is a little scene-setting…

Autumn is on its last legs and winter is pretty much here. The weather forecast is predicting snow for this weekend down in the valleys, whilst the mountains have been white for weeks. The days are short but the evening sunsets look like this, making it hard to complain:

Winter’s arrival means Christmas is round the corner and some towns are already in full festive swing. We daytripped down to Montreaux last weekend and it was lovely. They’ve got a HUGE Christmas market happening, a heady cloud of mulled wine and roasting chestnuts hangs over the town and even Freddie’s feeling festive: 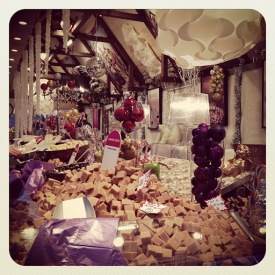 Christmas countdown means advent calendars (and the coca cola advert). I have always been a fan of the cardboard & chocolate variety (although did you see this story? Eek!) but this year I decided to do something a bit special and make one. It’s our first Christmas in our very own place and that alone feels like it’s worth celebrating (yes I can be a sentimental fool). We split the numbers (I’m evens, he’s odds), set a 5chf limit per pocket and I started on the calendar.

For the pattern, I used Elizabeth Hartman’s pattern as featured on Sew, Mama, Sew! I cannot lie, it took me a while to make. But mostly because I’m a beginner and a lot of the techniques were new to me (more on that later). That being said it is a really great pattern with clear, easy-to-follow steps.

For the fabric, I went back to a warehouse I discovered just over the border in France – Mondial Tissus. When I first arrived in Geneva I got really down about the price of fabric. At 30EUR/metre and upwards, it put the idea of sewing as a hobby way outside my financial capacity. At Mondial Tissus however fabric averages around 5-10EUR/meter and they have loyalty points and they have crazy crash sales. Love it. This is the place: 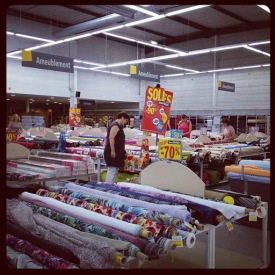 As you can see, it’s not the prettiest… and in fact on my last trip I noticed that the upstairs half of the unit is a sex shop… but whatevs. I bought a whole load of Christmas patterns and plains and headed back to start cutting out.The first step is to cut out a certain number of squares. Essentially for each pocket you need a front square in colour (a) and then a back square, a lining square and a number square in colour (b). Here they are in their little stacks:

For the numbers I used double-sided fusible webbing. This stuff is clever! It works a bit like double-sided-tape: you iron it on to one piece of fabric first and then the other. Once the numbers were stuck on I edged the numbers with a zigzag stitch. I worked in stages, getting all the squares to the same point (cutting, ironing, zig-zagging etc), before moving on. The hairclips helped me keep everything in order!

Once the numbers are all done, the next stage is to make the individual pockets. You place the front piece and the lining piece with right sides together, sew along the top, flip them so the right sides are facing out, and then sew them together on to the backing… clear as mud right? But once you get in to the swing it’s really not so hard, and the steps are a lot clearer in Elizabeth’s tutorial! Once you have all the individual pockets done, you edge them all in white “sashing” (technical term… as far as I can tell it means the bit between the pretty squares):

This is my stack with just the white tops and bottoms on, but you have to add them on all four sides. In the pattern there is a table which shows you how to cut the borders all different lengths so the pockets are slightly staggered. This was fiddly (ok it was late and I got grumpy) and I wouldn’t necessarily bother with this step if I was doing it again as I think I’ll be the only one who notices.

Anyhoo, when the pockets all have a white border you sew them in to rows, then sew the rows together and BOOM you have the quilt top done!

By this point I was feeling pretty darn proud of myself but this was also the point where it got scary. My wonderful instructions simply said: “Use your quilt top, batting and backing to make a quilt sandwich and machine quilt the sashing as desired”. Eek! Clearly this pattern was written for people who were used to quilting or had at least made one before, which I had not.

In the picture on the instructions Elizabeth’s was covered in beautiful free motion quilting, something I’d been wanting to try for a while. “What the dickens is free motion quilting?!” I hear you cry. Fret not, I didn’t know the name of it until recently either. Free-motion quilting is essentially quilting with the feed dogs of the sewing machine down (if you have ever seen a sewing machine, the feed dogs are the teeth-y things that poke up from under the foot) meaning that you control the direction of the stitches. Forwards, backwards, round and round, the world is your oyster. Have you ever seen quilts covered in lots of close loops? That’s free motion quilting.

This style of quilting is something I associate with American quilts. I’m not quite sure why; Possibly because my (British) grandma doesn’t like it or use it on hers. I on the other hand have always liked it. I like the look of it, the texture of it, the heavy thickness it gives the quilt. So I was keen to have a go. Thankfully the very same Elizabeth who produced the pattern had already written a post on “Free Motion Quilting Basics” over at her blog Oh Fransson! And it is just as clear and easy-to-follow as the calendar tutorial – happy days.

I didn’t actually take any pictures of the process (sorry), mostly because once I got going I didn’t want to stop. It is a weird sensation at first, and I fully recommend doing as Elizabeth says and practicing on a “quilt sandwich” first. But once you’re going it’s great and very satisfying!

For the calendar I only quilted the white sashing and not the actual pockets (for obvious reasons!) I then finished it off with green binding around the edge. By this point it was pretty late and I was determined to finish so I didn’t take any photos of the process of binding either!! However, this was another new brand new process for me and much like free motion quilting was not nearly as frightening as I had thought. For the binding I followed the brilliant tutorial at Prudent Baby.

And finally, it was done!!

I already knew where it was going to hang – in a tiny flat we only have one spot with a big space and strong hook, the back of the front door, so that’s where it’ll live!! I should really have moved it to a spot with better lighting for photographs but we (I) were too impatient to stuff it with all our little (and not so little) packages. I might try and take a few more at a later date.

I couldn’t be more pleased with it. And especially since we (the sewing machine, the calendar and I) went through such a steep learning curve together – double-sided webbing, free motion quilting, binding etc.

One thought on “14. Advent Calendar”